Armenian architecture, a particularly rich part of the Armenian heritage, is widely recognized as a unique contribution to international architecture. The tradition of architectural engineering has ancient origins on the Armenian highlands. During the Urartian period of Armenian history (9th through 6th centuries B.C.), existing traditions were developed and perfected. The Urartians were noted for their high standards in city building (Tushpa, Argishti, Erebuni), palatial complexes and richness of interior decoration.
Urban architectural traditions, as well as other forms of art in pre-Christian Armenia, were developed further under the influence of ancient Hellenistic and Roman art. The temple of Garni is the only pagan monument existing in Armenia. Armenia entered a new phase of architectural development with the adoption of Christianity as state religion in 301 A.C. City building and other forms of architecture entered a new phase of development, persevering older traditions.
In the early Christian period in Armenia (5th through 7th centuries), church architecture proceeded with the creation of various basilical domed houses. Armenian architecture carved its national style with the construction of the cathedrals of Echmiadzin, Hripsime, Zvartnots, and Geghard monastery. During the 9th through 14th centuries, Armenian architecture created new masterpieces: the monasteries of Amberd, Tatev, Aghtamar, Marmarashen, Sanahin, Haghpat, Haghartsin, Goshavank, Makaravank, Ohanavank, Harichavank and Noravank.

A unique manifestation of Armenian medieval national art is comprised by the monuments called khachkars or cross stones which were used widely in Armenia. Prehistoric monoliths which had ceremonial significance in the pagan religion are found in Armenia. After the adoption of Christianity, the wooden cross-symbol of the new faith was erected in the various shrines in Armenia. The earliest attempts to replace the wooden cross with a stone cross date back to the period between 4th and 7th centuries.
Following the Sovietization of Armenia in 1920, two architectural directions competed for dominance: the national and the modern. This dual track of architecture produced various phases of Armenian architecture, even during the short Soviet period. In Armenia today one can easily see the differences in style between the national: the Government Buildings of Republic Square, the State Opera House, the Matenadaran, the Genocide Monument, and the modern: the Sports complex, the Zvartnots Airport and other buildings. 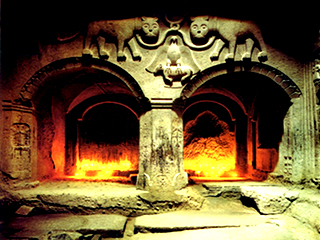 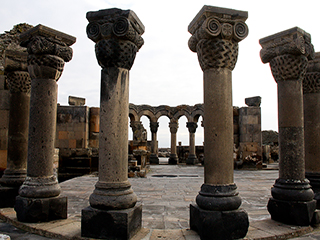 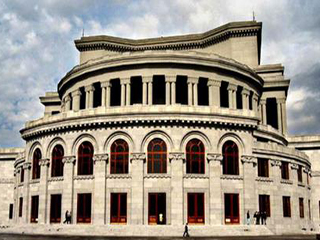