The artistic expressions of Armenian culture are at the very heart of its identity. It is through their architecture and sculpture, painting and pottery, music and dance, clothing and jewelry, literature and language, and textiles and weaving that one is able to gain an understanding of the Armenian people and the influences that have shaped their identity. Several hundred years before the birth of Christ, Armenians began developing an extraordinarily rich culture, influenced by a number of factors. The form of their art and their music reflects both their spiritual nature and their message. For thousands of years they have been expressing their history and their religion through unique artistic creations conveying Armenian values and beliefs. This can be seen in all of their community celebrations such as feasts, festivals, baptisms and wedding rituals. The events and influences that have shaped Armenian culture, and the art that expresses that culture, are numerous. A long and tumultuous history, marked by invasions, occupations, and massacres and battered by war for more than 3,000 years, has greatly influenced their culture and art, as well as Armenia's ever-changing geography and unique mountainous landscape reflected in its architecture and art. Monasteries, often built right into the side of a rock mountain, create exquisite and unique architectural structures.
This tiny nation, bursting with historical magnificence, has the distinction of being the "cradle of civilization". They have drawn on an incredible wealth of resources - an accumulation of 3,000 years of history - and the objects that Armenians have historically surrounded themselves including the home, wooden and metal vessels and utensils, clay jars for food storage, furniture, rugs, carpets, and decorative fabrics reflect this history. 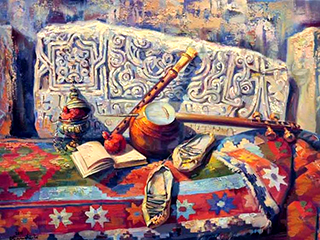 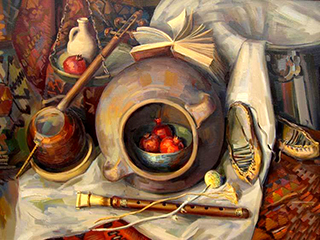 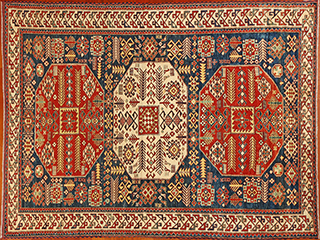